How To Measure The Success And Adoption Of New Features

Do you ever feel like you’re throwing spaghetti at the wall and seeing what sticks? Implementing new features into your product can be a lot like that.

You never really know how well the new added features will be received by your users. If you know that issue, you’re not alone. Product managers often struggle with measuring the success and adoption of new features. In this blog post, we’ll share some tips on how to do just that.

There’s no one size fits all approach to deciding what should go into your product. You have everything from user requests, market trends and competition in mind when adding new functionalities. But at some point, it can get too crowded or confusing, if there are too many different opinions.

Like, how things should look or work out logically. So sometimes, taking something away is better than trying more additions. This could, however, end up disappointing customers who were expecting previously announced features.

A common mistake entrepreneurs make early-on after launching their business online, is to keep adding features as quickly as possible, with the idea that this gets them traction faster. But often it’s the opposite; focus on just a few features, but really make them really stand out.

Once you have decided which feature to add and launch it in, the next step is to analyze its impact on your user behavior and any KPI or goal metrics. Traditionally analyzing these metrics and behavior have been very difficult and time consuming. With Stormly, you’ll get those results in just a few clicks.

The first step in adding a new feature to your product is always analyzing its impact on user behavior. This can be difficult and time-consuming, but not with Stormly! With just one click of the button you’ll have all necessary data at hand so that decision making will go much easier for everyone involved.

Does this new feature make a significant difference?

The more we understand about your audience, the better. That’s why with Aha-Moment analysis you can pick one goal and see how this new feature impacts it.

The Aha-Moment analysis will help us see whether this new feature makes a significant difference by giving you insight into one of your key metrics. For example, if we want to know whether improved retention or stickiness has had an impact on conversion rates. The answer would be yes because the more often people come back to the product, the more likely they are to convert.

Even more important, it also shows you if a new feature has a negative impact on any of your KPIs.

Analyzing impact of a new feature

In this example, we’ll be looking at a music streaming app where users can share songs with others. This is done by adding the feature of “sharing” which increases retention rates for those who invest time into doing so.

To analyze if adding a feature to favorite songs has an impact on day 7 or more retention, we’re going to open the Aha-Moment Insight, and choose the Retention goal. 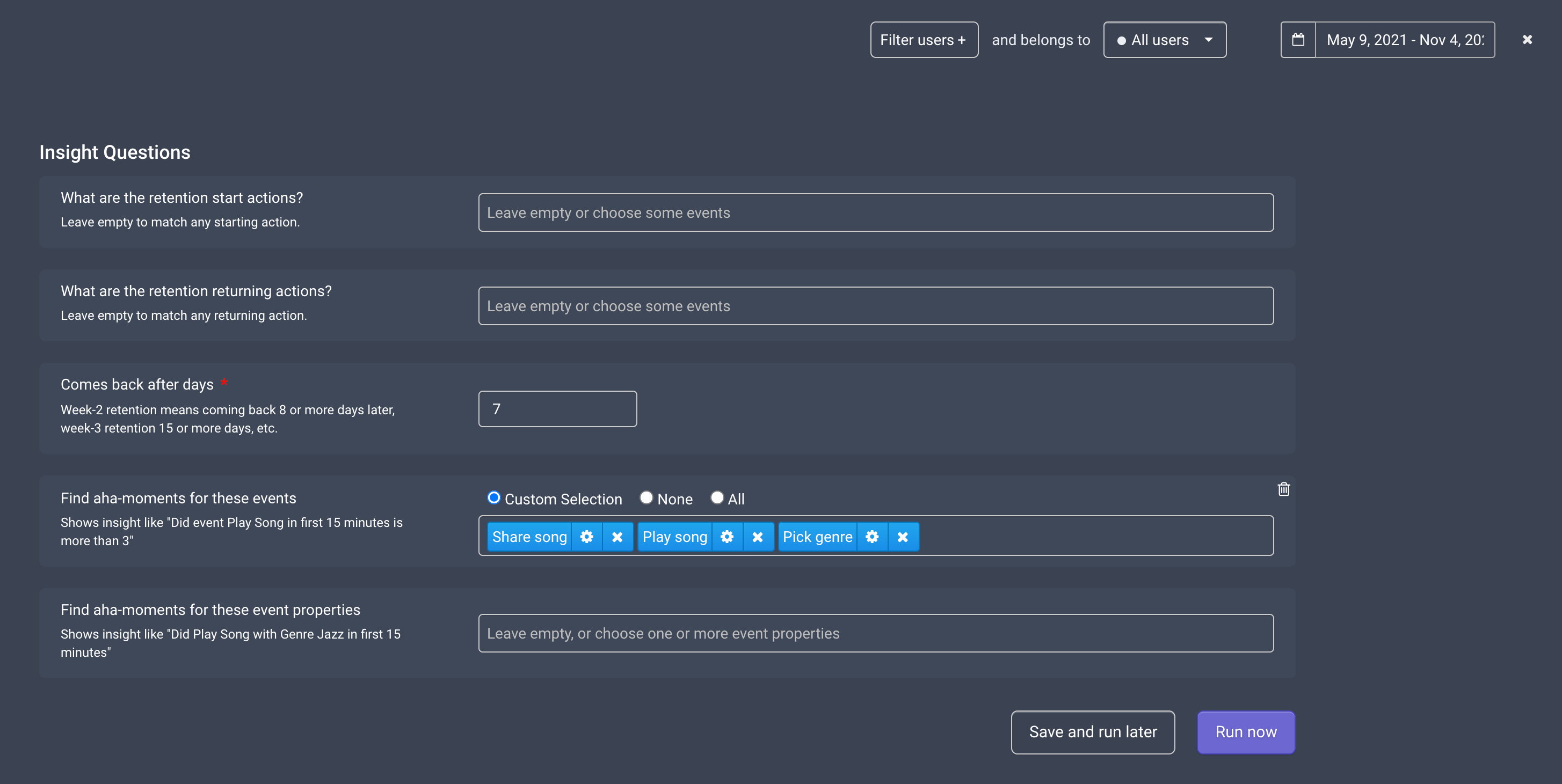 It turns out that the “Share Song” feature is not part of the Aha-Moment, so it doesn’t seem to be affecting day 7 retention at all. 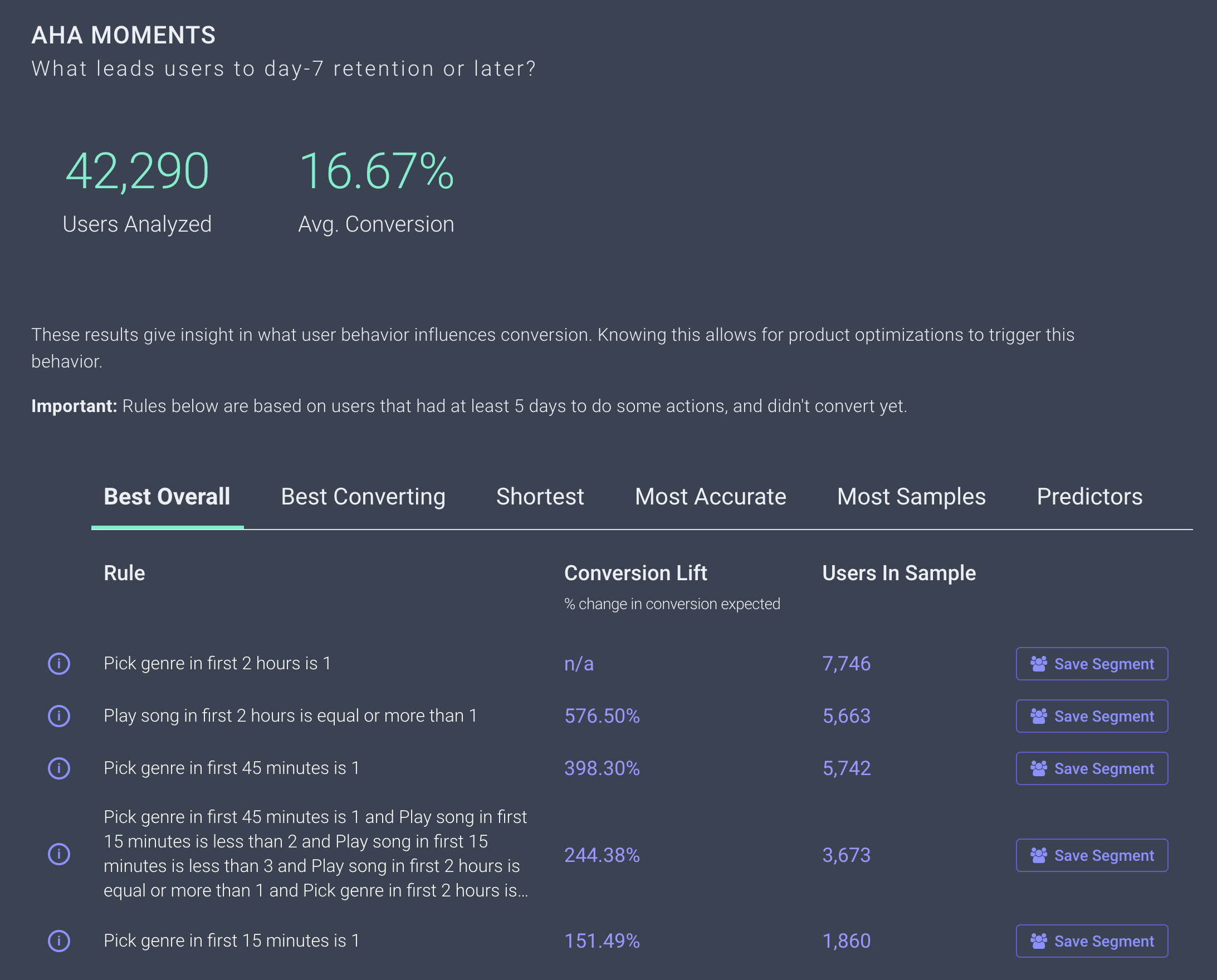 At this point in our analysis, we want to know why people are not coming back more often after they share a song.

To get to know the exact action our users take after sharing a song, we can open the User Journey insight. We’re going to choose the “Share Song” event as the start of our journey analysis, so we can see exactly what people do after that.

The results show that once users share a song, they are likely to want another one or favorite it. However, playing music within our app doesn’t seem that common. This could point out some problems. For example, our app could be buggy in a way that playing a song after sharing it doesn’t work properly. Hence, people may be more likely to churn and abandon the app.

By understanding how to measure the success of new features, you can confidently add them to your product and improve your chances for user adoption.

Sign up today and discover which features should be added (or removed) from your product– chances are, some of these newly-adopted functionalities may be just what you need to take your business to the next level.